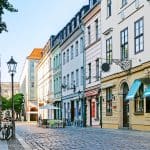 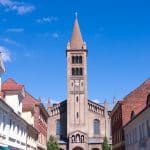 This morning, meet your guide and transfer by train to Potsdam, 30 minutes from the center of Berlin, but an idyllic world away from the urban landscape. This island city on the Havel River is the former home of Prussian royalty; its natural beauty honed and embellished over the course of three centuries into what is now a setting rich in history and striking beauty.

Arriving in Potsdam, you will collect your bicycles and begin your guided visit at Sanssouci, the Royal Park and Palace of Frederick the Great and his final resting place. Cycle through the park to Neues Palais, the last of the great baroque palaces favored by the Great King of Prussia.

In the historic city center, walk through the fairy tale atmosphere along the cobblestone streets and small shops of the Holländisches Viertel (Dutch Quarter). Continue on to the Alexandrovska, the Russian colony named for Csar Alexander I, built to house the early 19th century members of the Russian soldier’s choir residing in the city.

Stop for lunch at your leisure, after which, you will cycle to the Belvedere and climb the tower for the most spectacular view of Potsdam, with Berlin as backdrop.

Your final stop is Cecilienhof, the manorial residence of Germany’s last Kaiser, Wilhelm II. This palace was the site of The Potsdam Conference of August 1945, where Churchill (later Clement Attlee), Stalin and Truman defined the terms for that would precipitate the end of World War II and seal the fate of Cold War Europe for the next half-century.

Return to Berlin by train. We will provide you with suggestions for dinner this evening.

This morning, after breakfast at your hotel, the morning is yours to explore the surrounding Mitte district at your leisure. Transfer by taxi to the airport for your departure flight, or continue on to your next Willing Foot itinerary, in Berlin or beyond.