Russia’s capital city, Moscow is home to The Kremlin and Red Square. 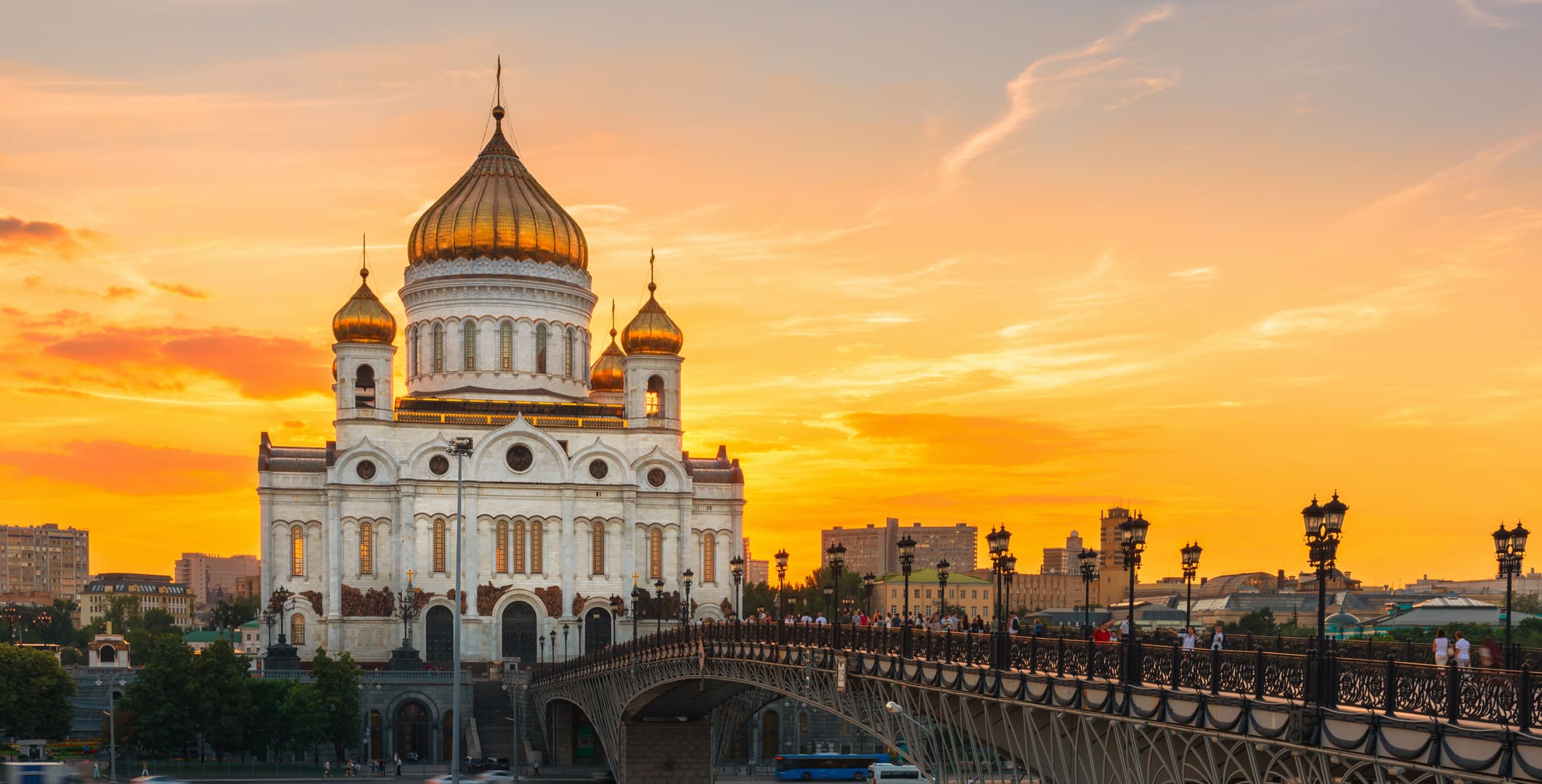 Arrive in Moscow today where you will be met at the airport by your driver and transferred by private car to the city center. Your five-star hotel is in the very heart of the city, near the Bolshoi Theatre and only few minutes’ walk from the Kremlin, Red Square and Saint Basil’s Cathedral.

Spend this afternoon at leisure. You may wish to book a massage at the hotel’s spa, or relax with a drink in the rooftop bar, which offers spectacular views of the city.

For dinner this evening we recommend traditional Armenian cuisine in a celebrated café.

This morning, following breakfast at your hotel, meet your guide for a private tour of The Kremlin, the iconic symbol of Moscow and the official residence of the President of the Russian Federation.

Within the walls of The Kremlin you’ll find a surprising number of ancient and magnificent structures. Among the most remarkable are the 15th and 16th-century cathedrals, the Ivan the Great Bell Tower, the Patriarch’s Palace, Grand Kremlin Palace and, of course, the incredible Armoury museum.

The Armory houses a fantastic collection of ancient state regalia, imperial court dress, and a unique collection of imperial carriages. Visit the 17th-century throne of Alexei Romanov, covered with a mosaic of turquoise and 900 diamonds. Other notable exhibits include the famous Fabergé eggs and the phelonion (liturgical vestment) decorated with 150,000 pearls that belonged to the Metropolitan Platon, an important figure in the Russian Orthodox Church during the Age of Enlightenment.

Continue on to view the interiors of the cathedrals, sites of the coronations, weddings and burials of Russian rulers.

For dinner this evening, we recommend a restaurant that offers nearly as much drama and atmosphere as the opera for which it is named. Enjoy Asian cuisine in an over-the-top dining room, grandly decorated in the style of Versailles. Later, you may wish to continue on to a popular Moscow night club.

Breakfast at your hotel this morning will be followed by a private city tour, beginning in the heart of Moscow – Red Square. Originally a commercial centre, Red Square has been at the very center of Russian history since the 15th century, from Ivan the Terrible’s confession of his misdeeds to the people in 1550, to demonstrations, executions and the great parades of the Soviet Union’s military might.

The name Red Square, Krásnaya plóshchad’ in Russian, is not a reflection of the country’s recent communist history. Rather, the Russian word for “beautiful,” krasnaya, in some instances also means “red.” From the time of Ivan the Great the square was used as a huge gathering place for public events, markets, fairs and festivals. The magnificent square encompasses an area of over 70,000 square meters and is bordered by the Kremlin walls, St. Basil’s cathedral, the State Historical Museum and GUM department store, the shopping arcade, which was completed in 1893.

Your city tour continues, taking in the main streets and boulevards of the ancient city. You will head to Sparrow Hills, high above the right bank of the Moskva River, from where you can easily see most of the city. View the façade of the refined New Maiden Convent, which has remained largely intact since the 17th century. This is one of the city’s most beautiful structures, located to the south-west of the city center, with 16 gilded domes. Many noble women, including Peter the Great’s first wife and his sister, took vows, spent the latter parts of their lives, and were buried here.

End your day with a metro ride. The Moscow underground is not only the fastest means of transportation in the city but also a unique architectural ensemble. Major stations built in the 1930s look like palaces, richly decorated with marble, mosaic and semi-precious stones.

This afternoon, transfer to the airport to meet your departure flight, or continue on to St Petersburg by high-speed train.

If you would prefer to spend an additional night in Moscow, we will provide suggestions for dinner this evening.