Turkey: Ephesus and Bodrum: Into the Ancient World

With ancient ruins set between rocky cliffs and the bright blue Aegean Sea, Ephesus and Bodrum are rich in both natural beauty and fascinating history. 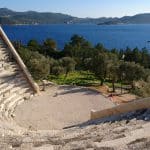 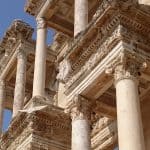 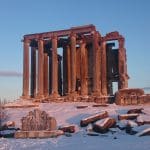 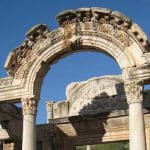 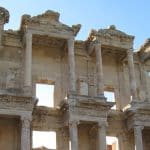 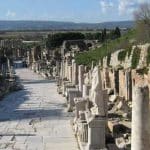 Today you will depart from either Cappadocia or Istanbul.

If your day begins in Cappadocia, you will depart this morning for Ankara, making the transfer by private car with your guide. The stunning, ancient city of Ankara traces its history from the Bronze Age Hatti people, through Celtic and Roman history, to its contemporary role as Turkey’s capital, a thriving hub of arts and politics. You will have a chance to visit Ataturk’s Mausoleum, the Museum of Anatolian Civilizations and Ankara Castle before your late afternoon flight to Izmir.

You also have the option of beginning your day in Istanbul. The cultural meeting point between Europe and Asia, Istanbul is a striking city in both its beauty and size. Once the great Roman imperial city of Constantinople, this populous region has been at the center of world culture, politics and finance since the days of the Byzantine Empire. Spend the day exploring the city with your guide, departing for Izmir in the late afternoon.

No matter where your day begins, you will land in Izmir late in the day, transferring to Kusadasi, on the Aegean coast in time for a quiet dinner by the sea.

Following breakfast this morning, meet your guide in the lobby of your hotel, setting out on a full day tour of Ephesus. The ancient city of Ephesus, once home to the Temple of Artemis, one of the Seven Wonders of the Ancient World, traces the history of its inhabitants back to the Bronze Age. The ruins of the city comprise an important site for Classical Greek, Roman and early Christian history.

Begin your visit with the Ephesus Museum, home to a wealth of archaeological finds, including two celebrated statues of the Ephesian Artemis. Continue on to the 6th-century Basilica of St. John, erected above the Christian saint’s tomb. Religious scholars believe that Apostle John spent the later years of his life in exile in Ephesus, completing his Gospels as well as other revered writings here.

Visit the Christian and Muslim shrine, the House of the Virgin Mary, considered by some to be the home where the Mary, the mother of Jesus, spent the final years of her life. The site, on Mt. Koressos, includes a chapel restored in the 20th century, beside the ruins of a 6th century structure and a much older foundation, purportedly dating to the 1st century AD.

Return to Kusadasi this afternoon in time to relax before dinner on your own. We recommend dining on your hotel’s terrace, with a panoramic view of the turquoise waters below.

This morning, depart Kusadasi with your guide, making your way to Bodrum via several striking ancient sites.

You will drive first to the ancient city of Priene, among the best preserved ancient Greek cities in Turkey. Set on a flat plane between the steep cliffs of Mount Mykale and the broad Meander River flood plain, the city, once known as Ionia, has provided a valuable source of information for the study of ancient civilizations.

Continue on to Miletos, once among the wealthiest and grandest of Greek cities. Miletos was an important port, lasting through several empires, to Byzantium, when the Meander River ceased to reach the now-dry harbor. Among the highlights here is the ancient theater, once the center of ancient philosophy.

On your final stop en route to Bodrum, visit magnificent remains of the Apollo Temple in Didyma. This was a cult center of the oracles for hundreds of years, second only to the mythical site of Delphi in the Hellenic world.

Arrive in Bodrum at the end of the day, where you will check into your luxury boutique hotel. We recommend dining at your hotel this evening, where creative Mediterranean cuisine is served on the terrace overlooking the Bodrum peninsula.

Meet your guide in the lobby of your hotel this morning to explore Bodrum, the ancient Greek city of Halicarnassus. The city was once home to another of the Seven Wonders of the Ancient World, the Mausoleum of Maussollus.

Visit the 15th-century Crusader’s Castle, home to the Museum of Underwater Archeology. The vast collection here, the largest of its kind, is largely made up of underwater discoveries of ancient shipwrecks in the Aegean Sea. With ancient glassware, coins and pottery dating back to the Bronze Age, the museum is a treasure trove of historical findings.

Spend the afternoon at leisure or join an optional private yacht cruise to the beautiful coves of Bodrum, a great opportunity to swim in the deep blue waters.

Return to your hotel, and then dine down in the port at any one of the simple and delicious outdoor fish restaurants.

This morning, transfer by private car to Bodrum airport for your flight back to Istanbul, where you will connect with your international departure, or carry on to your next Willing Foot destination.