More than A Tree Grows in Brooklyn these days, lots more. Besides being a hothouse of 21st century creativity, Brooklyn has a dynamic culture of artisanal food and drink, one-of-a-kind retail, and multi-century architecture. 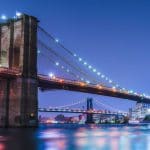 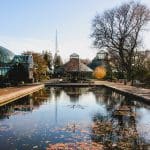 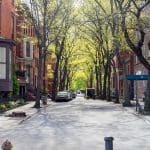 Brooklyn’s history dates back to the 17th century, when Dutch settlers christened it in honor of a province in Utrecht, Breukelen. As Brooklyn’s population swelled during the 19th century, the burgeoning city annexed smaller towns that had sprouted up nearby, among them, Flatbush, New Lots, Gravesend and Williamsburg. A hundred years ago, Williamsburg was the most densely inhabited neighborhood in all of New York City, packed with thousands of immigrants and second-generation Americans fleeing the sardine-can tenements of Manhattan’s Lower East Side. Nowadays, émigrés of a different order preponderate. Just as Greenwich Village and SoHo beckoned bohemians in yesteryears, creative types now flood Williamsburg, drawn by lower rents and more space to do their thing.

You’ll find unpresuming row houses politely sharing glamorously gritty terrain with snazzy new townhouses and apartment buildings as well as remnants of the area’s factory age. Many of those industrial workshops have been re-imagined for present-day use, including a former 1901 cooperage that made barrels and casks, nowadays a hotel, where you will head for a mid-afternoon check-in. The hotel has preserved its time-mellowed wooden beams to season the vanguard décor of the rooms, many of which offer killer views across the East River to a garden of Manhattan skyscrapers.

After settling in and before dinner, grab a walking map for a late-afternoon/early evening three-quarter-mile expedition to check out points of interest nearby. Directly across from the hotel is the Brooklyn Brewery, which since 1988 has been at the forefront of the craft beer movement. You can tour the factory and, in its lively tasting room, sample sips from its roster of award-winning brewskies. Head up North 11th Street to Bedford Avenue, Billyburg’s main artery of shops and eateries. At No. 129 is In God We Trust, a thoughtfully curated emporium of men’s and women’s clothing, jewelry and interior design, all of which were begot in the USA, mostly in Brooklyn. Homemade Brooklyn products also earn a showcase at the Bedford Cheese Shop, which vends a range of locally concocted comestibles, from Bloody Mary mixer to spiced beer jelly to taffy to pickles, all evidencing Brooklyn’s reputation as the foodiest of all five boroughs. The Bedford Cheese Shop features an array of chocolate made by the Brooklyn-based Mast Brothers, Rick and Michael. Visit their factory a couple blocks away to see how they craft their much-in-demand Vanilla and Smoke, Black Truffle and Stumptown Coffee bars, just a few of the flavors they’ve come up with, and all fetchingly packaged, for sale at lower cost here than anywhere else. A few doors from the chocolate factory, check out a famous shop home to retro office and paper supplies, as well as a permanent collection of 12,500 sketchbooks that have been donated by artists from more than 130 countries. You can request two at a time from a librarian and then settle in a comfy chair for an only-in-Brooklyn opportunity to peruse sketchbooks on themes like “Dirigibles and Submersibles,” “Jackets, Blankets and Sheets,” “Things Found on Restaurant Napkins” and “Mystery Maps.”

If there’s time before for dinner, visit other dots on the map: Pilgrim, a groovy surf shop with a wavy ceiling; Brookfarm General Store, an alluringly merchandised repository of American-made blankets, Turkish towels, Japanese and Scandinavian kitchenware, and more; The Future Perfect, a design store with urban-themed toile de Jouy and modern furniture. At 7 o’clock, claim your reserved table at Peter Luger, serving New York City’s finest steaks since 1887.

Year after year, decade after decade, the weathered beer-hall tables at Peter Luger have consistently been among of the most sought-after by informed carnephiles. Filet of sole and lamb are options, but there is truly only one choice: The Porterhouse, the prime reason that Peter Luger has for 28 years in a row been judged by Zagat as New York’s best steakhouse. Whatever you order, don’t miss out on the sliced Beefsteak Tomatoes, perfectly ripe specimens that the restaurant seems to be able to track down no matter what the season. Saucing them with Peter Luger’s special house-made condiment is de rigueur, and you can buy a bottle to take home on the way out.

After your meal, hop in a taxi, secured by the restaurant doorman, to take in an evening concert at a local music venue. Housed in a former mayonnaise factory and sporting an outstanding sound system and superb sight-lines, this venue books the best live indie rock acts in the city, be it electronic or Latin funk.

It’s about a five-block walk back to the hotel, where a nightcap at the 6th floor rooftop bar wins our endorsement, or simply head straight to bed (its frame custom-made from the building’s reclaimed ceiling pine) to rest for a full day of activities tomorrow.

Slip into comfortable shoes and at 9 AM head downstairs to the hotel’s farm-to-table restaurant, where we recommend the Whitefish on a Bialy with Arugula. Your knowledgeable guide this morning, Harry, will join you and brief you on Brooklyn background, from the biggest battle of the American Revolutionary War (yes, fought in Brooklyn) to the saga of the engineering of the storied Brooklyn Bridge.

Then, via taxi, Harry will accompany you to Brooklyn Heights and lead a two-hour walking tour. The first district in New York City to achieve protected landmark designation, way back in 1965, Brooklyn Heights claims block after three-lined block of picturesque row houses (600 of which predate the Civil War) in every breed of architectural style: Federal, Greek Revival, Italianate, Colonial Revival and Romanesque. Some of these row houses were once homes to the country’s greatest scribes, including Capote, Whitman, McCullers, Miller and Mailer, and your guide will show you those dwellings, as well as the brownstone that made a memorable impression in Moonstruck, all the while supplying intriguing anecdotes about other residents who shaped the city.

Along with its architecture, Brooklyn Heights boasts another attribute equally breathtaking: the famed half-mile Promenade, affording wow-inducing views across the East River towards the Manhattan skyline, the Brooklyn Bridge, New York Harbor, and, yep, there she is, Lady Liberty.

Harry will then lead you to the Brooklyn Bridge Park, a masterpiece of urban landscape architecture that opened in 2010 and was designed by Michael Van Valkenberg. Among this cutting-edge park’s unusual features is a man-made marsh and a system to recycle all rain water. It’s also one of the few waterfront parks where you can touch the water. Close by is another architectural dazzlement: Jane’s Carousel. Opened in 2011, this 1922 merry-go-round, painstakingly restored to its original condition, brightly spins in an elegant pavilion designed by Pritzker Prize-winning architect Jean Nouvel. The contradistinction of a carved-wood carousel in a modern Plexiglass box, whose accordion walls are folded back during the day, makes it one of the most thrilling works of modern architecture that New York City has seen in years.

At noon, you’ll visit Grimaldi’s, under the Brooklyn Bridge, for thin-crust Neapolitan-style pizza. Ordinarily, there’s a fiendishly long queue if you want to partake of this delicacy, but your table is pre-booked. This afternoon you’ll not only learn the history of one of Brooklyn’s signature foods – pizza — but along the way see an up-close view of the Verrazano Narrows Bridge (the longest suspension bridge in the world at the time of its completion, in 1964); Coney Island and its landmark Cyclone roller coaster, Parachute Jump (the “Eiffel Tower of Brooklyn”) and Wonder Wheel; the Russian enclave of Brighton Beach (known these days as “Little Odessa” and the neighborhood that spawned three famous Neils — Diamond, Sedaka and Simon); as well as waterside mansions along the southwest Brooklyn neighborhood known as Bay Ridge. Ending at a famous eatery in Bensonhurst, you’ll banquet on two square slices of the Sicilian-style pizza that have made this restaurant a Brooklyn landmark for more than 70 years. (It’s our favorite pizza, by the way.)

While traveling around Brooklyn, TV monitors mounted on the minivan ceiling will show clips of movies filmed in Brooklyn. As the minivan courses under the elevated BMT line of the D train in Bensonhurst, you can simultaneously audit the famous chase scene filmed there for The French Connection. Where John Travolta strutted his stuff (while stuffing his face with pizza) in the opening moments of Saturday Night Fever, you will be able to watch that very clip at the very same moment. Other film clips and locations include GoodFellas and Annie Hall.

You will return you to Brooklyn Heights, from where you can taxi back to the hotel to relax before dinner, at 8 PM, at a new restaurant in East Williamsburg (you can either walk or take a cab). Glittered with accolades from every quarter (including two stars from The New York Times), the restaurant has garnered a following for its moist, slightly sour Whiskey Bread served with cultured Vermont butter and for homey dishes like Amish Chicken with Spring Garlic, Pearls Barley, Cucumber and Burnt Hay Ash. The last element is all the rage in Brooklyn kitchens and adds a flavor similar to that of smoked mushrooms.

Return by taxi to the hotel after dinner this evening.

Prepare for departure from the hotel and leave your luggage with the concierge. There is no livelier brunch scene than in Williamsburg, and there are plenty of distinctive choices a few blocks away on Bedford Avenue. Consider the Bedford Restaurant or Allswell, or the neighborhood’s most popular brunchery, Egg. It doesn’t take bookings, but you can put your name on a list, plop down on a bench, and just pass the time soaking up the passing scene till it’s time to tuck in to Egg’s homemade biscuits.

Afterwards, walk the five or so blocks to the Brooklyn Flea, located just south of East River State Park, on the East River. Launched four years ago and situated against the stunning backdrop of the Manhattan skyline, this flea market produces one of the most, if not the most, happening scenes to be found in Brooklyn on a Sunday afternoon. You can join the indigenous citizenry to size up an on-trend range of vintage, antique and handmade wares and crafts (cutting boards made in Brooklyn’s Gowanus neighborhood, for example). There’s also ample chance to purchase take-home offerings made by Brooklyn’s thriving community of ever-inventive culinarians (Brooklyn salsa or jerky to name but two) and sample something on the spot (a Blood Orange Doughnut made by Bed-Stuy’s celebrated Dough, or our favorite, a frozen Arnold Palmer flavored with basil and confected by Kelvin Natural Slush). Walk the five blocks back to the Wythe for a late-afternoon departure, and prepare for your next Willing Foot adventure!