Not since the 1920s, when the famed Harlem Renaissance brought forth a rush of artistry and activity, has there been such a remarkable revival in a New York neighborhood. 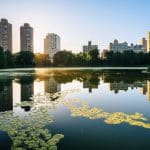 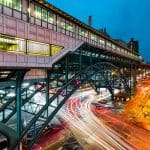 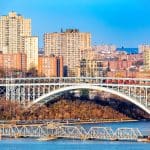 At 1 pm, arrive at the new Aloft Hotel, right in the center of Harlem and itself a symbol of the revitalization that has transformed the community.* Meet your guide for the weekend: Historian Michael Henry Adams, author of Harlem: Lost and Found. Says The New Yorker of Michael: “His knowledge of Harlem is encyclopedic, block by block and brownstone by brownstone.”

First stop on his private walking tour: The nearby Apollo Theater, which serves as the longest-lasting showcase for African-American talent in the country. Michael will share the history and provide an inside-look at his storied venue.

Harlem is noted for symmetrical blocks of row houses, and you’ll next head to their finest incarnation and one of New York’s most spectacular streetscapes: Strivers Row, designed by Stanford White.  Michael’s access will provide you the chance to visit a notable nearby apartment that retains its fine 1912 details, has a lovely décor, and features sweeping Hudson and East river views. Also on the agenda: The Studio Museum of Harlem, which displays important exhibitions of African-American art, and the neo-Palladian Morris-Jumel Mansion of 1764, the oldest residence in Manhattan (George Washington lodged here during the Revolutionary War and dined here with John Adams and Thomas Jefferson after becoming president).

A taxi will return you to the hotel, where you can relax before dinner at Red Rooster. Famed Swedish chef and owner Marcus Samuelsson (a Harlem resident nowadays) interprets traditional dishes from the South—exemplified by the restaurant’s Yard Bird, his version of Southern fried chicken. Afterwards, enjoy an after-dinner drink at the Lenox Lounge, its ambiance and décor virtually unaltered from the day it opened in 1939 and then went on to host legendary performers like Billie Holiday, Miles Davis and John Coltrane. To cap off the evening, Michael will lead you to a off-the-beaten-path basement club in a brownstone row house. This is where those in-the-know go to hear great authentic jazz.

This morning, start with coffee, juice and light fare at the hotel, saving room for brunch a bit later. Prepare for departure later in the day by leaving luggage with the concierge. Your guide Michael Henry Adams will be meeting you at 10 to start the day’s adventure with a visit to an architecturally splendid Harlem church where you will hear live, soul-stirring gospel.

Afterwards, head to brunch at the most famous soul food restaurant in Harlem,  Sylvia’s, founded in 1962 by Sylvia Woods and probably the only place in New York where you can have eggs and catfish, served with grits and biscuits, of course.

Afterwards, Michael will introduce you to Sugar Hill, an architectural diverse enclave that once housed W.E.B. DuBois, Thurgood Marshall, and Duke Ellington. Then head to the newly restored and reopened Hamilton Grange, an elegant 1798 Federal-style house that—when Harlem was still undeveloped countryside—served as the summer get-away for Alexander Hamilton and his family. There will be a full-interpretive tour inside this historic home, a National Monument run by the National Parks Service.

Return the Aloft for luggage and a late-afternoon departure.